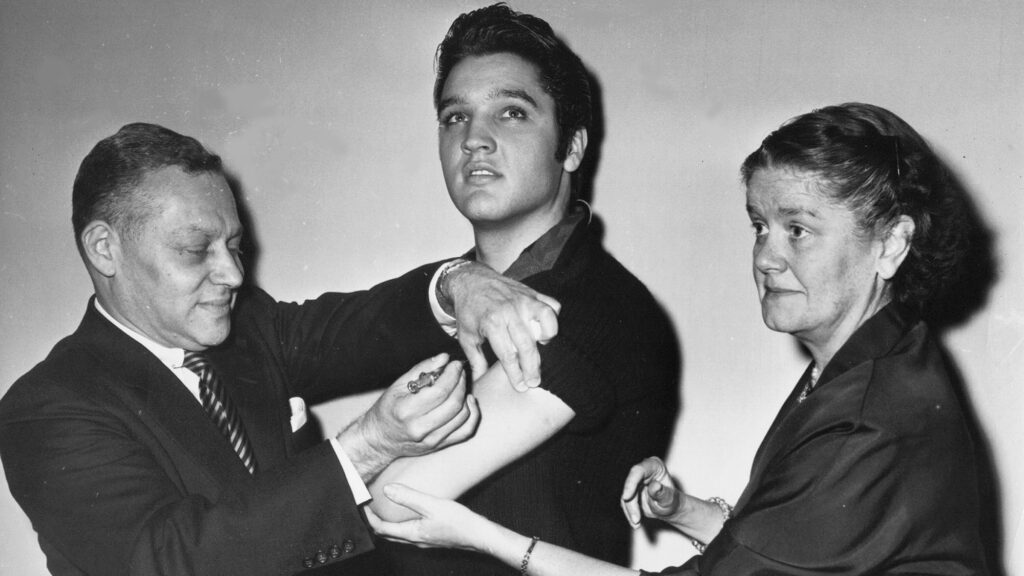 F.Former Presidents Barack Obama, George W. Bush and Bill Clinton announced earlier this month their intention to get vaccinated against Covid-19 – possibly on live television – to increase Americans’ confidence in the shots. Following their example, President-elect Biden said he too would take a vaccine on camera, as would Anthony Fauci, the nation’s most visible virologist. Ivanka Trump also signaled her willingness to be publicly vaccinated.

Celebrities and other influential people using their star power to promote a medical product is nothing new in America, not even to vaccines. Elvis Presley rolled up his sleeves to receive the polio vaccine on national television in 1956. The quick needle stick in the arm of the King of Rock ‘n’ Roll was one of the most memorable moments of the robust vaccine campaign that was led by teenagers. The crusade against the debilitating disease helped vaccinations skyrocket across the country, and by 1960 annual cases of polio in the US had dropped 90% from a decade earlier, according to the University of Cambridge.

Now that the first Covid-19 vaccine has been approved for emergency use in the US, some surveys suggest that only about half of Americans are willing to be vaccinated against the scourge, which occurs two every minute in this country Claims human life. The challenges of vaccine delay brought the spotlight to questions about the role celebrities, if any, should play in promoting public support for Covid-19 vaccines: How much can VIPs influence people’s opinion about vaccination, which celebrities are best to tap into? and Is it ethical for a big name to skip the line to get a vaccine in exchange for an endorsement?

“I think it’s going to be harder to have an Elvis Presley moment with Covid,” said Timothy Caulfield, professor of health policy at the University of Alberta in Canada.

Pop culture in the US is much more fragmented today than it was in the 50s, he said, which makes it harder to rally the public behind a particular influencer. (However, Dolly Parton has been hailed as something of a Covid-19 vaccine ambassador after it was reported that she helped fund the Moderna vaccine.) Caulfield suggested that The Rock, Tom Hanks or Beyoncé could be good ambassadors because they are loved and have a neutral place in pop culture. He also said that a public health campaign aimed at attracting A-listers should focus on finding celebrities who resonate with specific communities in order to build trust within those groups.

He added that any celebrity vaccine campaign should aim to create a memorable, shareable, and engaging message that also explains the science of the vaccine and addresses concerns people have such as: That means developing strategies that connect with people of different ages and reach them where they are, like on Twitter, Facebook and TikTok.

For a good chunk of people, they won’t get a vaccine and they won’t change their minds. Some may delve into conspiracy theories, claiming that celebrities who pretend to be getting a vaccine are actually being given placebos and tricking the masses, as some people claimed on social media after the former presidents made their announcement. Caulfield said public health officials should not focus their energies on this subset of people – who this month made up 1 in 4 of those polled by the Associated Press-NORC Center for Public Affairs Research this month – and instead look to those who who stand on the fence get vaccinated. About 27% of Americans fall into the “not sure” category, the survey found.

Caulfield, who has spent much of his time debunking the myths surrounding celebrity vaccines, advises public health officials to remove a page from the anti-Vaxx movement’s playbook. Jenny McCarthy, an actress and anti-vaccine advocate, has been successful at upholding the falsehood that vaccines cause autism, he said, because she was able to center the story around her autistic son and her struggles as a parent to resonate with other parents.

“They use these powerful anecdotes to spread misinformation,” said Caulfield. “We have to turn this upside down and start using narratives and creative communication strategies to get the good things across.”

A celebrity who has lost a loved one to the disease and understands the grief that comes with grief during a pandemic could be a strong partner in helping the public understand altruism in vaccinating and how they treat their loved ones protects. Such a message could reach the people at the fence, he said.

Steven Hoffman, professor of global health, law and political science at York University in Toronto, said if public health officials could work with a wide variety of celebrities including former politicians, religious leaders, movie stars, singers and athletes, it could be an effective tool to normalize and promote the use of the Covid-19 vaccine. But he cautioned that careful review is key.

“Sometimes picking the wrong celebrity can be a risk,” he said, “or a celebrity who tends to turn the news away or is open to mixing gibberish with science.”

Other experts wonder if celebrities acting as ambassadors for the Covid-19 vaccines could move the needle to ease people’s fears. For celebrities like Gwyneth Paltrow, promoting unproven and potentially harmful health products is one thing, but breaking away from entrenched ideas about vaccines is quite another. In fact, research on the influence of celebrities on creating an anti-vaccine sentiment dwarfs research on celebrities promoting vaccine use.

“When I say celebrities will help, do I know that is really true? Not me. I think it’s true, but I don’t really know, ”said Arthur Caplan, a bioethicist at New York University. “We spent a lot of money making these vaccines, but we didn’t spend anything on the social sciences trying to convince people to take them.”

A small study in Indonesia published earlier this year offers some support for the idea of ​​using prominent ambassadors: it recruited actors, pop stars, television personalities, and motivational speakers to tweet or retweet vaccination recommendations as part of a nationwide Twitter vaccination campaign. It found that vaccine tweets that celebrities wrote themselves got a lot more exposure than tweets that were written by someone else and posted from the celebrity’s account. The researchers concluded that celebrities could be effective partners in vaccination campaigns, especially if they just act like themselves.

Other research has shown that celebrities can inspire people to take other measures to prevent disease: the so-called “Angelina Jolie Effect”, many women followed the example of the movie star after it was announced in a 2013 comment in the New York Times had that she had a double mastectomy after learning she had a BRCA1 mutation that put her at high risk of cancer. And researchers also documented the “Katie Couric Effect” – an increase in the number of people who underwent colonoscopy after the newsreader’s television procedure.

Vaccination hesitations are of great concern in colored communities, especially black communities who have long distrusted medical research due to historical and current racial injustices. According to the AP-NORC survey, only 24% of black adults would get a Covid-19 vaccine and about 37% are unsure.

Malika Fair, Senior Director of Health Equity Partnerships and Programs for the Association of American Medical Colleges, is skeptical that celebrity support would noticeably change those numbers. “I don’t think it matters who is taking the vaccine,” she said. “I don’t think it will remove hesitation and suspicion about the medical system, public health system and politicians about the vaccine.”

One reason, she said, is because celebrities have access to the best medical care in case something goes wrong. “People don’t just think about what happens on the first day. You think what will happen in a month? What will happen in a year? What if I have a terrible reaction and I have no support? ”Fair said. Faith leaders and local doctors would likely have more success building community trust in Covid-19 vaccines, she added.

Thomas LaVeist, Dean of Tulane University School of Public Health and Tropical Medicine, echoed these views. However, he added that some athletes, such as Serena Williams and LeBron James, who are trusted voices in many black communities, are good examples of celebrities who could potentially add credibility to the Covid-19 vaccines.

“I don’t think there is a single messenger, and I don’t know who Elvis Presley would be today,” he said. “I think you need ‘Elvi’ or several Elvises to reach the population.”

There are also ethical considerations that need to be taken into account when using celebrities to promote the vaccine. Under no circumstances should they cross the priority line to get vaccinated, said Lawrence Gostin, professor of global health law at Georgetown University. That would mean that in the first few months of the vaccine’s launch, no public relations campaign should attempt to televise athletes and young, healthy celebrities who are getting a vaccine out of line. Instead, they should focus on partnering with celebrities who fall into the high-risk groups. Obama and Bush and Clinton spokesmen have said, according to CNN, that former presidents would only get their vaccinations within their priority groups.

President Trump, who will be a past president for much of the vaccine roll-out, will play a crucial role in whether or not the vaccine effort is successful, LaVeist said.

Doses of the Pfizer BioNTech vaccine will be offered to Trump and other White House officials starting Monday, according to Reuters. While it is unclear whether he will try to have an “Elvis moment” and get vaccinated on live TV if he receives the vaccination, Trump could be a useful vaccination ambassador, according to People Magazine, in telling his supporters get vaccinated. said LaVeist.

“There are many people who have followed him along the way from not wearing masks, not taking this pandemic seriously, and putting themselves and their communities at risk,” LaVeist said. “I think a lot of these people can turn around. He can reach people I don’t know others can reach. “

- March 24, 2021
0
Much to the relief of the global design community and its supporters, the prestigious Salone del Mobile Milano (or Milan Furniture Fair), which was...

From Gal Gadot to Trevor Noah, celebrities weigh in on the...

Alana Haim thought her mum was Joni Mitchell | Leisure and...

The Life Record: eight youngsters taking after their superstar mother and...